Unit 3 Understanding Financial Statements Sources for the Collection of Data

Business requires making decision for acquisition on several factors. In this context, financial statements should be interpreted thoroughly so that no wrong decisions may be made by the company. Present report deals with Deepwater Ltd which is energy exploration organisation. It is planning to acquire Maxshale Ltd engaged in Shale Gas exploration that could help company to take advantage of this new resource and earn profits. Thus, financial statements are used to take decision whether to acquire firm or not.

A) 1. Description of transaction in financial statements

There are various transaction which are reflected in either income statement or balance sheet. The description related to each transaction are as follows-

Deepwater Ltd received and paid invoice for £50,000 from legal advisors which will be reflected in Statement of Profit or Loss (SPL).

Organisation paid £20,000 for registration of patents will be reflected in Statement of Financial Position (SOFP) in assets section.

Company owes the subcontractor amount of £90,000 and as such, it will be reflected in SOFP as it is a liability of company to pay creditor.

The interest charges paid by the company is non-operating expense and as such, it will be shown in SPL (Titman, Keown and Martin, 2017).

2. Explanation of transactions in specific statements

The transaction identified in above description can be listed as follows

Description 1- Deepwater Ltd paid legal fees to legal advisors and as such, this amount is classified as operating expense under SPL and will be deducted from gross profit.

Description 2- Organisation has paid £20,000 for acquiring patents and it is registered for 25 years. Thus, patents will be shown in Non-current assets in SOFP.

Description 3- The amount which firm owes to subcontractor will be shown in current liabilities under SOFP.

Description 4- Interest charges will be shown as non-operating expense in SPL and due amount will be paid in 2025. Thus, due amount should be listed under Other liabilities section in SOFP.

B) 1. Difference between tangible and intangible non-current assets

2. Criteria to meet as an asset

Patents are considered as non-current asset in the balance sheet of company. Deepwater Ltd meets this asset as amortisation expenses are paid by organisation for registration for 25 years (Amortization. 2018). The conceptual framework as provided by IASB that asset is termed as a resource for organisation because of past events and which will produced economic benefits in the future. Thus, Deepwater Ltd has paid registration fees as it will provide benefit in forthcoming years.

A) 1.Computation of gross profit margin 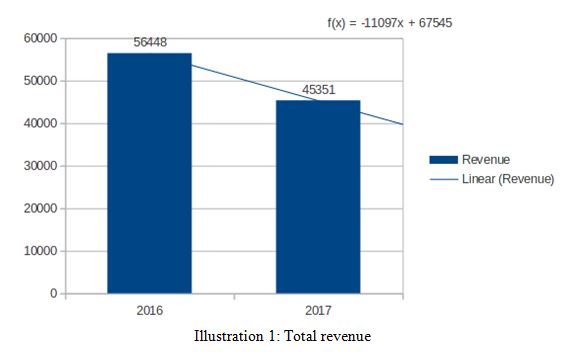 It can be interpreted that revenue was 56448 in 2016 and decreased to 45351 in 2017. The revenue is diminished up to a high extent. The revenue is decreased, however, gross profit is increase of Deepwater Ltd because expenses incurred on attaining sales are alleviated up to a high extent. This is evident from the fact that Cost of sales was 52124 in 2016 and decreased in 2017 to 38457. Much difference is found between cost of sales and as such, revenue is minimised, however, gross profit is increased.

3. Application of trend analysis in Oil and Gas exploration 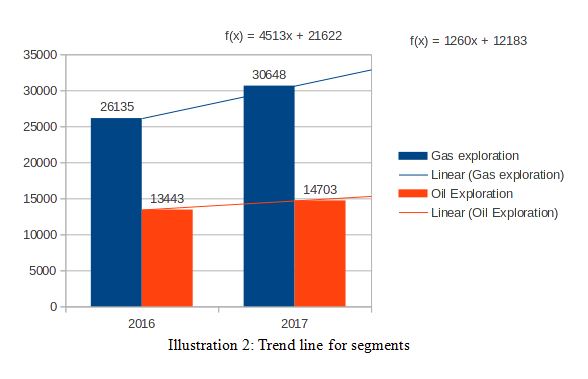 The above graph shows that Gas exploration is increased in 2017 to 30648 as it was 26135 in previous year. Moreover, Oil exploration was 13443 in 2016 and maximised to 14703 in 2017 which is good enough for company. Both are increased because as listed in the case study, contracts with energy producers for exploration is successful, then small commission on the basis of volume extracted is attained forming a part of other operating income annually.

4. Reason for change in profits

The reason behind decrease in revenue and increase in gross profit is that Deepwater Ltd has provided aggressive discounts and liberal policies of returns which has lead to decrease in revenue. It is required that strict return policies should be implemented so that revenue may ne generated (Minnis and Sutherland, 2017). However, gross profit is maximised from 2016 to 2017 financial years because operating costs are being reduced up to high extent. It has been beneficial for company as labour expenses, expenditures incurred on selling goods are quite effectively minimised. Thus, minimising operating costs has lead to increase in gross profit.

B) 1. Application of financial technique

The graph shows that expenditures are reduced up to a high extent as it was 3995 in 2016 and reached to 2903 which highlights efficiency of organisation in controlling expenses. This has eventually impacted on other income as it increased quite effectually in 2017. Other expenses such as employee expenses, research costs are increased which means that expenditures are reduced quite significantly. Other operating income is maximised because of commission attained from energy producers. 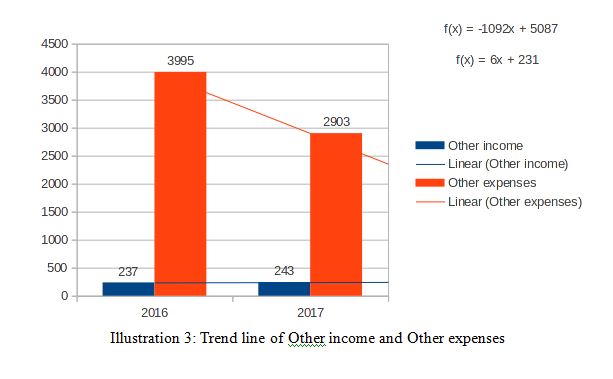 The performance of the company is overall good in 2017 in comparison to previous year. This is evident from the fact that linear equation of other expenses clearly shows that Deepwater Ltd has initiated control on its expenditures. It can be analysed that in 2016, expenditures were 3995 which reduced up to 2903 in 2017 financial year (Kwok, 2017). Thus, it implies that administration expenditures are minimised and as such, it is good indicator of performance of company. On the other hand, other income is increased in 2017 as company has earned income regarding to its profitable operations. It can be interpreted from trend line equation as it is positive as income was 237 in 2016 and maximised to 243. Thus, it shows that movement in trend analysis is positive indicator of financial performance.

The movement of other income and other expenses has led to positive indicator of financial performance for the company. The main reason behind such movement is that Deepwater Ltd has effectively decrease operating expenses and as a result, other income is increased. Moreover, cost of goods sold is minimised. This has benefited organisation and performance is enhanced. 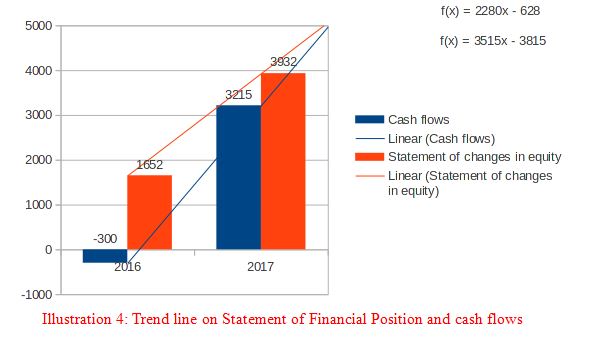 Profitability position is highlighted in above graph. ROCE is immensely improved as it was 3.93 % in 2016 and increased to 29.80 % in 2017. Gross margin was increased in 2017. Net operating margin was 1 % and reached to 9.34 % showing organisation has good financial health. Net operating margin is increase because administration expenses are reduced as it was 3995 in 2016 and diminished to 2903 in 2017. On the other hand, gross margin is enhanced because of reduction in operational expenditures. ROCE is enhanced which means that firm is utilising assets quite effectively and producing profits.

The above trend line shows that performance of company has increased as cash flows were negative in previous year while it maximised in next year. Moreover, ratios are also improved. Thus, movement is positive (Rezaee, Sharbatoghlie, Elam and McMickle, 2018).

3. Reason for change in financial position

The main reason that has increased profitability position of organisation is that it has initiated control on expenditures on exploration and further, effective strategies are also implemented.

B) 1. Calculation of financial ratios

2. Comparison and recommendation to buy company

It can be analysed that financial position of Maxshale Ltd is not good as per the benchmark set by Deepwater Ltd. This is evident from the fact that ROCE is below 20 %, gross and net operating margin are also low (Johnston and Petacchi, 2017). Interest cover is below 3 and gearing ratio is more than 50%. Only current ratio meets the criteria. Thus, it is recommended not to buy Maxshale Ltd.

2. Derivation of figures from financial statements

From operating activities, income tax paid is directly taken from SPL. On the other hand, trade payables is taken from SOFP.

The improvement has been made in the working capital which had led to improved cash flows of Deepwater Ltd as well. This is evident from the financial ratios that company has satisfactorily garnered payments from receviables and made quick payments to suppliers. Efficiency ratios such as receivables days and payables days both ratios provide clarity that it has been improved by company. Both the ratios are good which has improved cash position of company. Furthermore, it is required that firm should collect outstanding amount from debtors more quickly which would help to pay-off money to creditors and suppliers. This will further improve cash position of organisation.

There are other two reasons which has led to improvement in cash flows. Proceeds from sale of intangible assets and proceeds of sale of PPE has effectively improved Deepwater Ltd cash flow in the best possible manner (Berger, Minnis and Sutherland, 2017). Furthermore, current ratio is also increased which has further improvised company's cash position in effective way. Thus, company is able to meet its shot-term liabilities and as such, adequate cash is available for meeting daily operational requirements.

Hereby it can be concluded that acquisition decision should be taken by considering various elements in order to meet set targets. It is extracted from the report that Maxshale Ltd has not good financial position as per the criteria set by Deepwater Ltd and as a result, acquisition should not be done. Thus, acquisition is important decision to be made by analysing varied factors before making final decision.