Importance of Motivation in Building Team in BBC

University: The University of Adelaide

organizational behaviour is concerned with understanding, controlling and predicting of behaviour of people and interactive relationship is influenced by their culture. Behaviour of organization is an attempt to understand people on the basis of meeting the needs and wants of people as well as achieving the goals and objectives (Chumg and et.al., 2016).

In this present report, British Broadcasting Corporation (BBC). It is the world’s largest and oldest national broadcasting company founded by John Reith. Its turnover in 2017 is about £4.954 billion. It provides its services on television, radio and online. This report will analyse the influence of culture, politics and power on the behaviour of others in BBC as well as this report will also evaluate importance of motivation in building team in company. Furthermore, content and process theory will also discuss in this report.

BBC is an international company that serves across the world to understand their behaviour by using some models of theories which makes it easy to analyse. Charles Handy's model is the best model to analyse and determines the behaviour of BBC.

Management of BBC is using these models, which assist in understanding behaviour of people working. Charles Handy's is a well-known philosopher who has expert in the culture of organization (Coccia and Cadario, 2014).

Power- There are some organizations where power remains in the hands of only few people. They have the authority to take decisions as well as they are the person who enjoys special advantages at work place. Those people who hold power are the most essential people of the company as they take all the major decisions.

They have the power and authority to deliver roles and responsibilities to other people but sometimes they utilize their powers in wrong way. In these situations, subordinates have no option rather than following those instructions. Subordinates have no liberty to express their view and ideas on an open platform (Lee, Kesebir and Pillutla, 2016).

TaskCulture- This is the best culture that company follows as it focuses on building team. Team are formed to achieve the targeted goals and objectives as well as solve the critical issues and problems coming in the organization. In such companies, people with common interests and specialism come united in order to form a team. In this type of culture, there are majorly four to six persons in a team and each member of the team has to contribute equally to execute task in the most creative and innovative manner.

PersonCulture- This is the culture where each and every employee's of an organization feels they are valued for organization. They feel they are more valued than organization. BBC follows this culture to make their employees satisfied and happy but it is not good all the time, employees must also think for the sake of organization because of this tendency of always thinking for they suffer company in large. They came to work only for money; not for any attachment with company. Therefore, company tries to evoke the thinking of organization on first priority.

RoleCulture- This is the most common culture which is followed by all organizations. In this culture, duties and responsibilities are delegated to employees according to their skills and qualities and education as well as the most important is interest they have. This culture is somewhat similar to the power culture as delegation of roles and responsibilities is assigned by the people who have authority and power in their hand (Reb and Atkins, 2015).

b) How culture, power and politics affects the behaviour within BBC

The behaviour of people working in BBC is largely affects the culture, power and politics. In pastime, employees are not able to say something; they are not able to raise their issues and problems with their seniors in BBC. However, not in present time BBC is following Handy Culture Model which majorly focuses on employees needs and wants as well as it also controls the power and authority of senior managers. Employee's engagement survey conducted which reported that employee engagement is increased by 3% to 69% and about 93% of employees feel proud to work in BBC which shows that BBC has better culture and behaviour.

P.2.a). Determine the examples of content and process theory.

Content Theory- It is the theory which directly linked with the needs and wants of individual or person. It deals with what encourage and motivate people which is directly and indirectly related with there needs and wants. This theory includes Abraham Maslow, David McClellan and other psychological theory.

Maslow's hierarchy of need theory- This theory is given by Abraham Maslow in 1943. This theory has direct focus on motivation of people. According to this theory there are various types of needs which people have during there life span. This is the most primary needs of a person as without fulfilling these needs, people will not allow moving forward (Maslow's hierarchy of need theory. 2017).

Needs are written below-

Physiological need- This is the most essential needs of the employee's. This is the first priority of each and every individual as it is basic needs of employees. A person do work or job in order to satisfy his/her need which are food, cloth and shelter. In order to motivate employees BBC should fulfils the needs and wants of there employees.

Social needs- This needs alsoplay an essential in the organization. Only work is not enough, it is very necessary to create the Eco-friendly atmosphere and environment in the administration. It is the basic need of employee's to have friends and family while working in the company.

Self-satisfaction- This is also the primary need of an employee as it is very important to give chance to them as all employees has potential to accomplish the task.

Self-esteem- This is need also plays a vital role in the organization as every one needs respect and honour while working in the company whether he/she is manager or sweeper. Each one deserve respect (Hafenbrack, Kinias and Barsade, 2014). 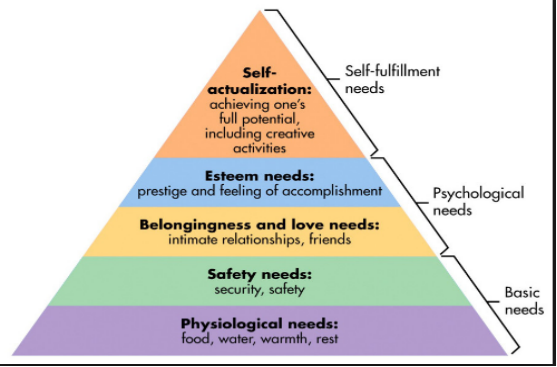 Process Theory- This theory deals with the procedure of motivation and it has focus on how motivation occurs. Motivation is very essential part of a company as It states energy that stimulates an individual to act towards the completion and reaching of targeted goals and objectives of company. Herzberg, Maslow, Alderfer and McClellan theories are included in process theory (Gabriel and et.al.,2015).

Frederick Herzberg's theory- This theory was given by Frederich Herzberg in 1959. This theory is also called as motivation-hygiene theory or intrinsic vs. extrinsic motivation. There are majorly two factors included in this theory i.e., motivation and jib satisfaction. This theory summarized that there so many elements at the workplace that cause satisfaction of job and separate set of elements that could cause dissatisfaction.

b). Ways to improve the level of motivation within BBC.

There are so many ways which helps in improving level of motivation at BBC. It is very important for each and every organization to improve and develop motivation which are as follows-

Team is a group of people who has a common goal to achieve. Different peoples work under a roof. Where no specific face appear. Every organization has its own team to perform different task to achieve their goal. There are different type of team which are working with BBC are below:

Virtual Team: Communicate via media like digital communication rather than person to person is the work of virtual team. This team work together from different location. BBC mostly having a conversation(mail, video conversation) with the help of its virtual team.

Allocation of team makes work so easy. Every team is responsible for their work not a single person. So having different team is important. With the team allocation right person place in the right department according to his/her quality.

b). Ways to make effective team within BBC

Work in groups makes working environment friendly. Benefits of group working are complete work below the deadline, saving per person cost and efficiency of work. Four stages searched by Tuck-man to make group work effective. These are :

Forming: Forming is the first stage of group development. In this stage group come together. Members focus on what they will do. In this stage members come to know each other and purpose of group. In forming stage responsibilities divided. According to quality of members, rules of group discussed, resources availability for the group and how they use these resources.

Storming: Second stage of group development is storming. Argue, competition, conflicts between groups are on pike. In the second stage every group become familiar with their role, responsibilities towards the group. Issues will be arise. Questions on leader, responsibilities. Resolve the issues of this stage group can move on to the next coming stage (Kitchin, 2017).

Norming: After solving the all previous issues the next stage is norming. In this stage group work as a team. Members work with their skills, talents and experience. Members have their focus on group objects. Work with flexibility to achieve the group's object with the help of each other.

Performing: At this stage group members have trust and ready to work with each other. They are able to take decisions without help of leader. Members know clearly about their goal, what and why they are doing. They work like a team and avoid conflicts. Group support each other, have a healthy working environment, use their knowledge and energies for goal achievement.

Division of department, build team according to requirement, understand their work responsibilities, effective leadership, mutual co-ordination, support, two way clear communication are the factors which makes an effective team. Different team but all have a common goal which is company growth. BBC has different types of team but all team have a single goal. Members comes from different- different zone but with the help of above define stages they know why and what they have to do (Coccia, 2014).

P.4.a) organizational theory for improvement in team performance and productivity within the BBC.

This theory states as the relationship between the organization and its external environment. It refers the behaviour of an individual or group who interact together to conduct various activities in order to complete a common goal and target. In this context, it means it is a study of social relationship in between a single person to the organization. In addition to this the effects of inside and outsiders business environment. For improving in productivity and team performance the organizational approach is the best solution and it has various element for improvement there is a special theory in this context, describes below:

Path organizationGoal Theory- Organization It is refers as the leadership approach that the leader has a skill to directing all activities in the right way. In this theory, the leader sees the best path that needs to be tread and it is leads to the accomplishment of a target. It is a special model based on the leadership style and behaviour that fit into work environment. The BBC use this technique as the business tool and achieve many desired objectives. By using this the leaders can improvement their team member's productivity (Carney, Cuddy and Yap, 2015). Get Assignment help By Australian Experts at affordable price.

b) Barriers of effective performance.